This summer, Yungblud has wowed audiences at festivals worldwide including Rock Am Ring in Germany, Splendour in the Grass in Australia, Lollapalooza in Chicago, Pukkelpop in Belgium, alongside touring the US on the last ever Vans Warped Tour. Just this weekend Yungblud hit the stage at Reading and Leeds Festival in the UK,

Yungblud partly credits his razor-sharp lyricism to his lifelong love of literary-minded songwriters like Bruce Springsteen and Chris Difford from Squeeze. A multi-instrumentalist who plays guitar, bass, piano, and drums, he first picked up a guitar at age two and began writing his own songs at age 10. At an early age, Yungblud moved to London to kick-start his career and refine his musical vision,

He made his debut with “I Love You, Will You Marry Me” - a song whose gritty storytelling recounts the real-life tale of a tragic romance at a public housing project in South Yorkshire. 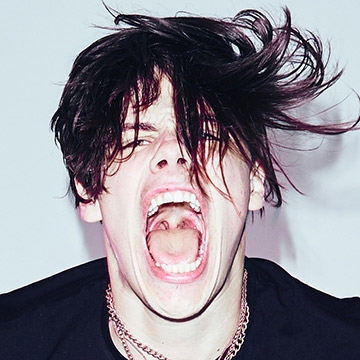