Greta Van Fleet have announced they unfortunately need to reschedule their Olympia Theatre date due to illness.

Twenty-seventeen went on to be a wild ride of sold-out concerts in North America and Europe, glowing press, accolades from a slew of fellow artists from Elton John to Nikki Sixx to Justin Bieber, millions of YouTube video plays and Spotify streams, two #1 EPs, a Gold record in Canada, and most importantly, the genesis of an extraordinary connection with their fans.

Greta Van Fleet will see its debut album, Anthem of the Peaceful Army, released on October 19, 2018 (Lava/Republic Records). The album’s first radio track, “When The Curtain Falls,” took a mere three weeks to explode into the Top 10 at Rock Radio and is currently at #3 on the Rock Radio charts. The song has accumulated more than 18.5-million streams, and four million-plus views of the track’s companion music video.

Greta Van Fleet’s shared message with their music is to spread “peace, love and unity,” and their collective goal is to have people walk out of their live shows feeling  invigorated, energised and  exhilarated, and to take that feeling out into the world. 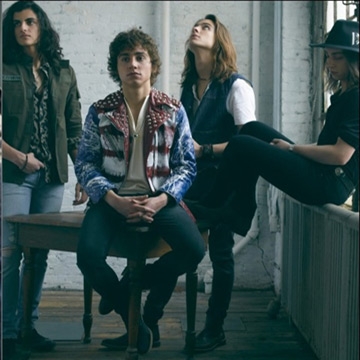