Mark Knopfler - Down The Road Wherever Tour

Mark Knopfler - Down The Road Wherever’ tour

Mark Knopfler, one of the most critically and commercially successful artists of all time, has announced a world tour with his band in 2019. The ‘Down The Road Wherever’ tour commences in Barcelona in April and will continue all over Europe including Dublin’s 3Arena on Friday 24 May before heading to the US through August and September.

Knopfler, who will release his ninth solo studio album ‘Down The Road Wherever’ on 16th November, has always viewed touring as an integral part of the process of releasing an album, going from songwriting through recording and ending up on the road performing old and new songs.

Hailed as one of the greatest guitarists of all time, Mark Knopfler has sold in excess of 120 million albums across his Dire Straits and solo career, and many of his songs have become standards, including ‘Money For Nothing’, ‘Sultans Of Swing’, ‘Romeo & Juliet’ and ‘Walk Of Life’.

He has released eight solo albums as well as recording ‘Neck And Neck’ with guitar great Chet Atkins, and collaborated with Emmylou Harris on ‘All The Roadrunning’.  He has created several film soundtracks, including ‘Local Hero’,  ‘The Princess Bride’ and ‘Altamira’. In addition to producing his own records Knopfler has also produced albums for Bob Dylan and Randy Newman amongst others.

Knopfler was made an OBE in 1999 and was given the prestigious Lifetime Achievement Award at the Ivor Novellos in 2012. 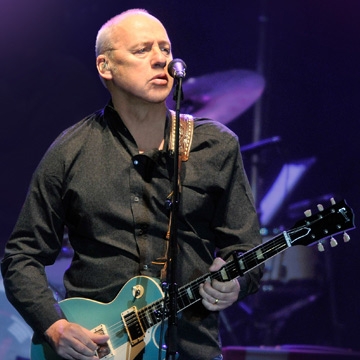