a-ha have always set themselves challenges. In 2018, their the MTV Unplugged tour proved that their songs could be given new settings and remain as alive and as impactful as ever.

Magne Furuholmen, Morten Harket and Pål Waaktaar-Savoy will be performing in An Evening With format, with an interval. For the first half of the concert, they will play new and old, familiar and less-familiar songs. Then, after returning to the stage, they will play the ten songs of their 1985 debut album Hunting High And Low in the running order of the original release.

Together, Hunting High And Low’s ten songs are more than a debut album. “Take On Me”, “Train Of Thought”, “Hunting High And Low”, “The Blue Sky”, “Living A Boy’s Adventure Tale”, “The Sun Always Shines On T.V.”, “And You Tell Me”, “Love Is Reason”, “Dream Myself Alive” and “Here I Stand And Face The Rain” are ten songs which captured a-ha’s heart and soul. And the hearts and souls of fans world-wide too.

The tour is timed to celebrate the 35th anniversary of the release of the original version of “Take On Me” – issued in the UK on 19 October 1984 to reputed sales of just 300 copies. The re-recorded “Take On Me” was released in Britain during April 1985 to little fanfare, and in America that May where it hit big after its striking promotional video was seen on TV. It was reissued in the UK that September and, finally, the British hit came. The Hunting High And Low album was on sale in America in June 1985, and in the UK in October 1985.

It was a long way from when, two years earlier, the three members of a-ha were making demos on a four-track, reel-to-reel tape recorder in a holiday cabin owned by Pål’s family in Nærsnes, near Oslo.

As Pål admits, a-ha’s road to Hunting High And Low was full of twists and turns. Despite the band’s self-belief, there was never any certainty of success. If their label had not allowed to them to re-record “Take On Me” and then make the new version which became the global hit, that may have been that. Nothing was cut and dried. 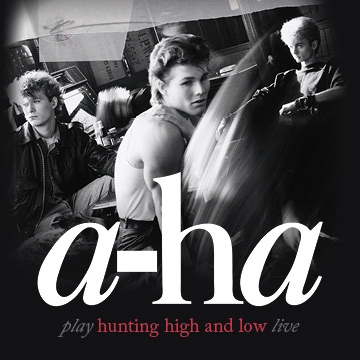