Country music icon Kris Kristofferson  is heralded as an artist’s artist, the three-time Grammy winner has recorded 30 albums, including three with pals Willie Nelson, Johnny Cash and Waylon Jennings as part of the Highwaymen. Kristofferson has spent three decades performing concerts all over the world, in most recent years in a solo acoustic setting,

Kristofferson achieved remarkable success as a country songwriter at the start of the 1970s. His songs "Me and Bobby McGee," "Help Me Make It Through the Night," "Sunday Morning Coming Down," and "For the Good Times," all chart-topping hits, helped redefine country songwriting. By 1987, it was estimated that more than 450 artists had recorded Kristofferson’s compositions.

His renown as a songwriter triggered Kristofferson’s successful career as a performer and that, in turn, brought him to the attention of Hollywood, leading to his flourishing career as a film actor. Kristofferson has acted in more than 70 films. In 1977 He won a Golden Globe for Best Actor in “A Star Is Born.”

Many would have hung their hat by now. Instead, Kristofferson barely has paused for breath. He’s released several recent high watermarks including the increasingly intimate A Moment of Forever (1995), The Austin Sessions (1999) and This Old Road (2006), and he produced some of his finest work with the deeply personal Closer to the Bone (2009) and Feeling Mortal (2013). Kristofferson has reached living legend status, 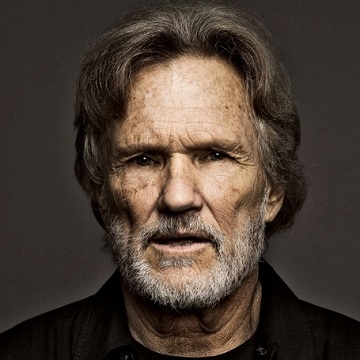