London trio Peluché bring elements of Latin, funk, psychedelia, soul and hip-hop,  Peluché are a troupe of intrepid troubadours, whose freewheeling artistry has already cemented their position as a standout force in London’s diverse music scene.

Slippery Latin bass grooves, subtle instrumental flourishes, funk breakdowns, and a touch of magical lyricism a la Kate Bush or Cocteau Twins, makes for an unforgettable sonic journey into the tinderbox chemistry of a group with a collective and deeply personal musical vision.

High praise has been heaped on them from Noisey, i-D, Q, NME and The Line of Best Fit and The Guardian who described their sound as “dub spaciousness and pop sensibility, one that John Peel might have played on his show circa 1981…idiosyncratic but infectious…like Sade on 4AD”.

Wireless support has already come their way from the BBC (Radio 1 and 6Music), Radio X and Resonance FM, and they’ve opened shows for some of the brightest stars in contemporary music. 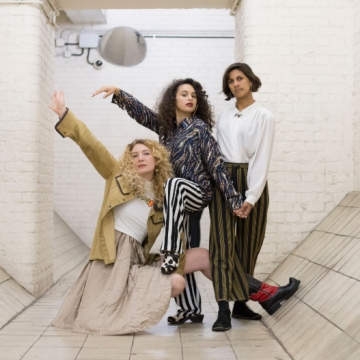