The UK-based Trash Boat announced the release for their full-length album, Crown Shyness out 20th July.

Trash Boat - Two years of nonstop worldwide touring with acts such as New Found Glory, Beartooth and The Wonder Years fine-tuned the band’s jagged, muscular songwriting - and helped imbue Crown Shyness with an overflowing sense of honesty and, above all, accountability.

British punk rock band Trash Boat formed in St Albans in 2014. The group consists of Tobi Duncan, Dann Bostock, Ryan Hyslop, James Grayson, and Oakley Moffatt. The group has released two EPs; one was released independently in 2014 while the other was released after signing with Hopeless Records in 2015.

Capstan is a high energy mix of pop punk, prog, and post hardcore. Blending deeply emotional lyrics with high energy technical instrumentals. Think "Progressive Pop-Punk".
Drawing inspiration from acts like The Wonder Years, A Day To Remember, Every Time I Die and Between The Buried And Me. They've truly created a genre of their own. 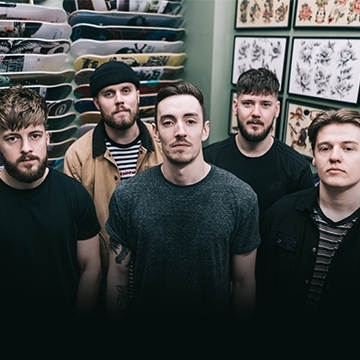