Ska band The Skatalites are from Jamaica. They played initially between 1963 and 1965, and recorded many of their best known songs in the period, including "Guns of Navarone." They also played on records by Prince Buster and backed many other Jamaican artists who recorded during that period.

2019 marks the 55th Anniversary of The Skatalites. The original members had played on hundreds of recording sessions before forming the band in 1964. They backed most of the vocalists in Jamaica at that time, including Bob Marley, Toots and The Maytals, Jimmy Cliff, Alton Ellis,Ken Boothe and many more.

After disbanding in 1965 the individual members continued playing in various groups as the music evolved from ska to rocksteady to reggae. In the late 70's a resurgence of interest in the music began in the U.K.

In 1983 The Skatalites reunited to play Reggae Sunsplash in Montego Bay and subsequently in London at The Crystal Palace for the U.K version of The Sunsplash event. 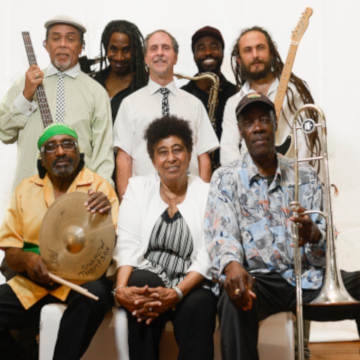