George Ogilvie will hit the road with a repertoire of strikingly honest material which has become his calling card: songs of depth, honest and quality.

George Ogilvie started his career by making covers on YouTube when he was 15, Now 25, he has sixteen thousand YouTube followers and has on average 1.5 million monthly listeners on Spotify with over 50 million streams.

In recent years George Ogilvie has been releasing original music professionally and performing all over Europe. Last year George played dates in Paris, Copenhagen, Berlin and more. In December l2018 George sold out St Pancras Old Church in London. This was his first show with his band which he will take on tour later this year.

After 2 EPs and multiple successful singles George Is currently recording his debut album at Peter Gabriels Real World Studios with producer Ali Staton(Snow Patrol, PJ Harvey). This album will be released via George’s own record label Red Afternoon, a joint venture with Believe distribution.
Having described the making of his current music as ‘literal musical therapy’.

George has received a string of high praise for his usage of candid songwriting from outlets such as BBC Introducing and Clash, and rapidly built up a fanbase with over 1.3 million monthly listeners on Spotify. 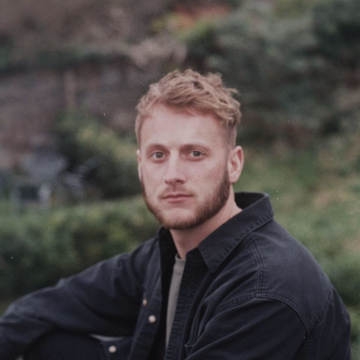