From the Sahara Desert region of northern Mali, Tinariwen is a Grammy Award-winning group of Tuareg musicians The band was formed in 1979 in Tamanrasset, Algeria, but returned to Mali after a cease-fire in the 1990s.

The kings of Saharan desert blues, and heroes of the Touareg struggle for freedom, dignity and self-determination. After 9 albums and over 1400 concerts throughout the world, the band return in 2019 for tours of Europe and North America.

During the last 18 years Tinariwen have become globally loved and revered for their creation of a new music genre as well as the integrity and tenacity with which they defend their culture. Hugely attractive to both audiences and musicians who find in it some kind of truth and spiritual depth.

In 2012 they won the world music Grammy Award for ‘Tassili’. In 2010 they took part in the opening ceremony of the World Cup, to a global audience of 1 billion

“…a mesmeric evocation of the mood of yearning inculcated through years of exile, all nourished by the vast emptiness of the desert” - The Independent.

“…one of the most extraordinary and unlikely musical success stories of the last few years.” - The Daily Telegraph 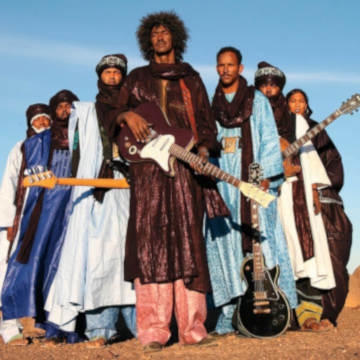