Surf Curse’s initial songs were frantic punk anthems about adolescent heartbreak and alienation, and the band quickly developed an audience of young people who resonated with Rattigan and Rubeck’s anecdotal writing.

Over the past five years, seeing Surf Curse live has become a right of passage for disaffected youth in the South-West while Rattigan and Rubeck have spent their formative years between Las Vegas, Reno, and Los Angeles.

Their new record, Heaven Surrounds You, is a coming of age epic, inspired by the many cult films they’ve cherished throughout their young adulthood that are referenced across the album’s track-list. Rattigan and Rubeck worked with veteran indie producer Jarvis Taveniere, carefully crafting a their most lush and vulnerable record to date. 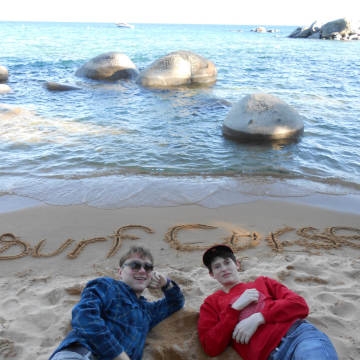