In 2014 Big Joanie’s ​Sistah Punk​ EP was released on Tuff Enuff Records, and in 2016 they self-released their haunting single 'Crooked Room'. Establishing themselves amongst London's thriving DIY punk scene they have since toured the UK and Europe supporting acts such as Downtown Boys, Shopping, Parquet Courts and more

Big Joanie's record ​Sistahs​ was released in November 2018 to wide acclaim from Rolling Stone​, ​Pitchfork​, ​The Quietus​ and more, along with copious airplay on BBC Radio 6 Music and KEXP-FM.

Outside of the band all three members have strong community ties, from helping run the festival for punks of colour​ ​Decolonise Fest​, coaching new talent at​ ​Girls Rock London​, or launching the '​Stop Rainbow Racism​' campaign which works to stop racist performances in LGBT venues. Black feminism is at the heart of Big Joanie's music and actions. 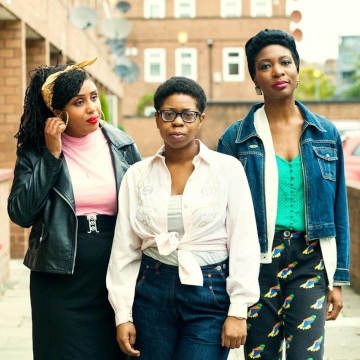