This celebrated comedy show redefines the form in unexpected and profound ways, from two of the funniest, most influential and acclaimed talents of the past century. The duo will be joined on stage by Grammy Award-winning bluegrass band The Steep Canyon Rangers

Steve Martin and Martin Short’s humor is often subversive, but it is always a joyous self-deprecating romp from two comedy masters driven to make each other laugh as much as the audience. The jokes come at you at a rapid-fire pace with little set-up and big punch lines as they mock Hollywood and the fickle nature of celebrity, but the comedy truly soars when they lovingly (and relentlessly) roast each other.

Steve Martin is one of the most well-known talents in entertainment. His work has earned him an Academy Award®, five Grammy awards, an Emmy®, the Mark Twain Award, and the Kennedy Center Honors.

Martin Short, a celebrated comedian and actor, has won fans and accolades in television, film and theatre since his breakout season on Saturday Night Live over 30 years ago.

His popularity and exposure on SNL led Short to cross over quickly into feature films. He made his debut in Three Amigos and followed with Innerspace, Three Fugitives, Clifford, Pure Luck and Tim Burton’s Mars Attacks. 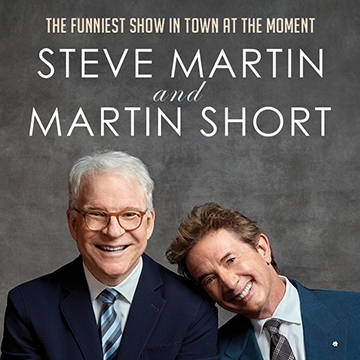