Glasgow’s five-piece Ímar have created more than a bit of a stir in little over a two year's since their formation.

Imar's debut video, unleashed to the world during Celtic Connections 2016, has been viewed in excess of 200,000 times - whilst their touring credits already including the opening set at that year’s Cambridge Folk Festival (technically, the band’s first billed gig - a plaudit surely amongst as rare as they come) and headlining a stage at Belgium’s Dranouter Festival just a week later.

The Irish and Manx flavoured quintet Imar consists of Adam Brown (bodhrán), Adam Rhodes (bouzouki), Mohsen Amini (concertina), Ryan Murphy (uilleann pipes) and Tomás Callister (fiddle) share a strong background in Irish music – although only Murphy actually hails from Ireland; Rhodes and Callister are from the Isle of Man, whilst Amini is a Glasgow native, and Brown originally from Suffolk. 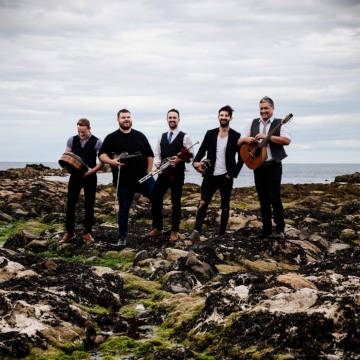