Together, they have formed a formidable reputation as one of the best live bands around, releasing three acclaimed albums on UK label Honest Jon’s Records. With a sound that calls to mind traditional New Orleans big-band jazz and nods to the avant-garde angularity of their father and his contemporaries, Hypnotic Brass Ensemble are equally informed by rap, funk and hip-hop.

They have worked alongside Mos Def, Prince, Ghostface Killah, Childish Gambino, Gorillaz (including 3 tracks on Plastic Beach), Erykah Badu, Robert Glasper and Tony Allen among others. Their stirring song War even featured on The Hunger Games soundtrack.

Hypnotic Brass Ensemble’s signature dose of hard brass will have you on your feet, singing along and bouncing around ‘like trampoline testers’ - (Evening Standard). 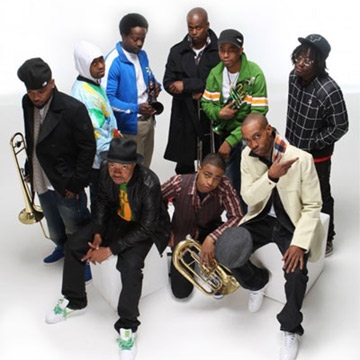