Flook - The flutes of Brian Finnegan and Sarah Allen, the guitar of Ed Boyd and the bodhran of John Joe Kelly weave and spin traditionally rooted tunes into the breathtaking sound of the groundbreaking band Flook. Flook possesses a rare blend of fiery technical brilliance, delicate ensemble interaction and a bold, adventurous musical imagination.

There is no shortage of virtuosity amongst the members of Flook, but the unique impact of this band stems from the wholly intuitive, almost symbiotic, exchange between the various flutes, frets and skins.

"In the pantheon of Irish/English folk groups they don’t come much more revered than Flook."  Irish Post

"Head and shoulders above the rest... Magnificent"  The Irish Times

“Sheer musical magic...Stunning technique, impossibly agile rhythm work and virtuoso flights of jazzy improvisation add up to one of the most enthralling sounds around.”  The Scotsman 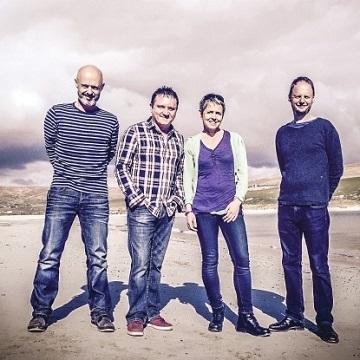