Volume cranked, heads held high, smiles wide, eyes on the prize, Dropkick Murphys charge forward with the same spirit that brought them here in the first place…yet with a new determination and exuberance that brings both their live show and new album to the next level.

Hot on the heels of their new album Turn Up That Dial, which was released worldwide on 30 April, comes the news that Dropkick Murphys will play 3Arena Dublin and the Telegraph Building Belfast in February 2022.

Tickets for these dates go on sale this Friday 7th May at 9am from Ticketmaster.

Photo can be downloaded HERE

On Friday, February 21, 2020, the band walked onstage in front of 9,000 people at the majestic Alexandra Palace in London. All signs pointed to 2020 being maybe the most enjoyable and memorable year of the band’s career yet. We all know what happened next. Touring ceased. Cities shut down. Way too many of our brothers and sisters lost their lives. Hunkered down at home, Dropkick Murphys staved off depression by leaning on the music and leaning on each other.

“At first, we didn’t know if or when we’d ever play music again, but we found a way to do it,” states Casey. “It was nice to have something to work on to keep us sane and give us a little bit of hope. We also had the time to tinker and change things we probably wouldn’t have ordinarily. I wish it was under different circumstances, but the time was ultimately beneficial.”

“We’ve all done plenty of lamenting, so the main goal was to keep this fun. The darker the times got, the harder we fought to uplift with this music. Whatever we’re potentially giving to fans, trust me, they’re giving it to us tenfold. Now, turn up that fucking dial.” 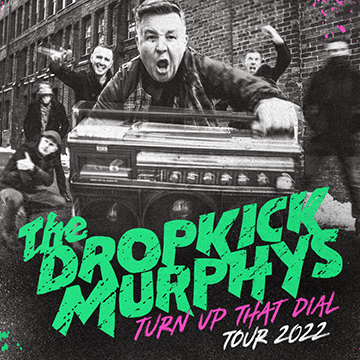