Musical duo Foster & Allen are from Ireland consisting of Mick Foster and Tony Allen. In their 40-year career, they have released over 30 albums, many of which entered the UK Albums Chart.

They did their first concert tour of the U.K. in 1983 and this tour was boosted even more by the release of another mega hit single “Maggie”.  This proved to be a very popular song and, along with “A Bunch of Thyme”, have become their signature tunes.

They had five No. 1 Hits in Australia/New Zealand.  They have appeared on numerous T.V. shows in Ireland, Scotland, England and Wales as well as Australia, USA and Canada. and they have had their own T.V. series on RTE Television in Ireland.

In the early days Mick & Tony performed on stage as a duo, but in 1982 (when the concert tours started) they added a band to their show thus giving a much fuller sound to their program. 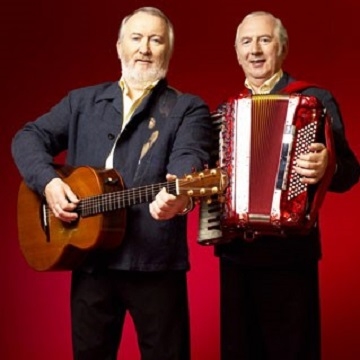 Foster & Allen - Putting on the Style