The Pat McManus Band are a powerful three-piece blues/rock trio, headed up by the former “Mama’s Boys’ and ‘Celtus’ guitarist/violinist virtuoso Pat McManus. Pat is today considered to be one of the last remaining individual guitar heroes of a generation of Irish guitarists, after the sad and early loss of both Rory Gallagher and Gary Moore. ‘Mama’s Boys’ were one of the greatest rock bands to come out of Northern Ireland.

Born in Derrylin, Co.Fermangh, N.Ireland. Pat McManus’s father, John, and his mother Valerie were highly accomplished Traditional Irish music players, so it wasn’t long before Pat and his two brothers, John and Tommy, were picking up all the instruments lying around the house and learning to play. By the age of 7, Pat had already performed on live T.V. and by 14 he was All-Ireland Fiddle Champion.

The brothers soon swapped their Fiddles, Uilleann Pipes and Bodhrans for electric instruments and formed their first band. 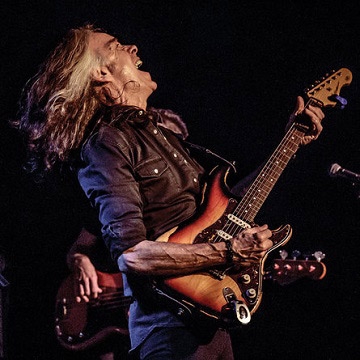