Irish stand up comedian, writer, and actor Joanne McNally is a native of Killiney, County Dublin.

She burst onto the comedy scene in 2014 & in less than a year in the business, Joanne became the newest co-host on RTÉ 2’s flagship comedy show Republic of Telly, co-wrote and starred in the stage show Separated At Birth, a comedy about her adoption & sold out her first ever solo stand up show in Dublin. Since then she has gone on to perform alongside some of the biggest comedians in the business including Kevin Bridges, Dara O Brien, Stewart Francis, Rich Hall & Jason Byrne. She also starred in The Commute on RTÉ 2 and Soft Border Patrol on BBC NI. She recently performed in the 3Arena for Comic Relief.

She is a regular on the airwaves with a weekly slot on 2FM called Mack The Week. She has performed at all the major Irish festivals including Kilkenny Cat Laughs, the Vodafone Comedy Festival, Body & Soul, The Electric Picnic & Longitude , the 3 Arena.

Joanne is also a freelance writer and has written for the Irish Times, The Irish Independent, Insider Magazine, U Mag, Bash Magazine, The Sunday Times and has her own column in Stellar Magazine Jo’s World. 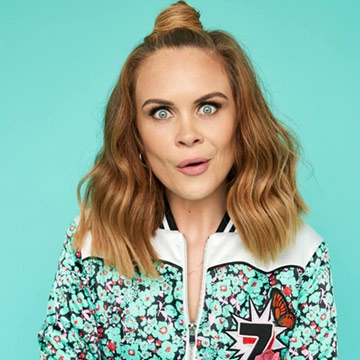