The UCD Symphony Orchestra is University College Dublin's flagship instrumental group, with a membership in excess of 80 players. It is a professionally-led ensemble that offers student scholarships and can be taken for academic credit irrespective of study programme. It provides a vibrant learning environment and a great platform for students to meet new people across the entire university spectrum. Sectional tuition is provided by principals from the RTÉ National Symphony Orchestra and RTÉ Concert Orchestra.

The UCDSO’s repertoire centres on concert works from the 19th and 20th centuries, while a wider audience has been cultivated with popular events, such as a Night at the Movies series, a concert of music for young people in 2013 and two concert performances with live band of The Beatles’ Sgt Pepper album in 2015. The UCDSO engages in joint projects with university orchestras outside Dublin, and has traveled in the past three years to Mannheim in Germany and Uppsala in Sweden.

The orchestra is a member of the European Network of University Orchestras. 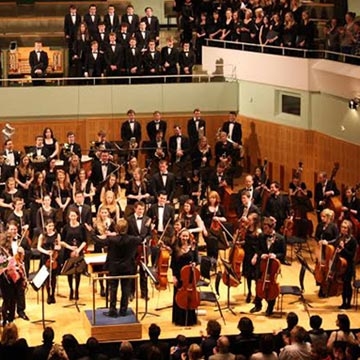 The Bootleg Beatles & UCD SO