Taking to the main stage for what promises to be a phenomenal headline set will be Tiësto joined by very special guests, Clean Bandit and also on the bill: Robin Schulz, Sigala and Disciples.

Tiësto: With a remarkable career spanning over 20 years, Tiësto remains one of the top dance music acts in the world. Revered for his live shows as well as for his production and remix work, Tiësto is a globally celebrated DJ that has been named The Greatest DJ of All Time by Mixmag and the #1 DJ by Rolling Stone.

Sigala: Within the last two years, Bruce Fielder has gone from nowhere to essentially dominating the UK dance scene.

London producer trio Disciples gained international recognition through their collaboration with Scottish record producer Calvin Harris on How Deep Is Your Love.

Tennent’s Vital is an over 16s event. However, a parent aged 25 and over can take up to two under 16s to the show. Parents will be required to show age identification and sign a consent form in order to gain admission on the day. Under 16s must be accompanied by their parent at all times. 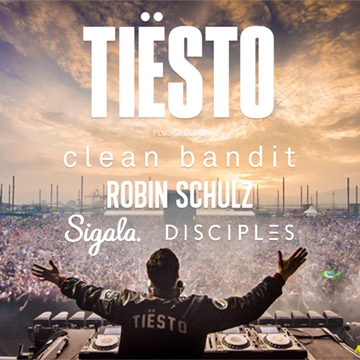