This trio brings together the dazzling talents of three of the country's finest traditional musicians; button accordion master Máirtín O'Connor, fiddle player Zoë Conway and guitar and bouzouki player Donal Lunny, drawing on an eclectic mix of the old and new where traditional tunes and songs meet each of their diverse influences and unique compositional voices.

Irish button accordionist Máirtín O'Connor is from Galway, Ireland, who began playing at the age of nine, and whose career has seen him as a member of many traditional music groups.

Irish Fiddle Player and Composer Zoë Conway is an awesome talent equally at home playing and singing Latin jazz with Rodrigo y Gabriella, as a guest soloist with the Irish Chamber Orchestra, performing with Lou Reed and Nick Cave, or touring the world with Riverdance. However, traditional Irish music remains close to her heart, witnessed in her highly-acclaimed solo albums. 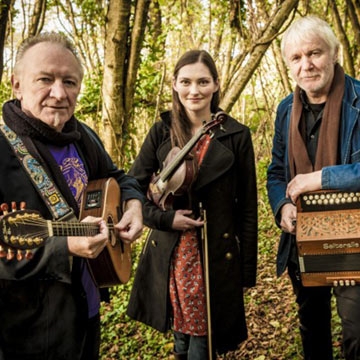