This September Ane Brun will release her first studio album since 2011 and a month later Ane and her fantastic band will kick of an European tour. Don’t miss Ane Brun when she makes a very welcome return to Dublin’s Vicar St on 7th December.

‘Directions’ is distinguished by dramatic kettle drums, subtle licks of piano and double bass, as well as BRUN’s tremulous voice, which glides angelically through a musical landscape that is as idiosyncratic as – if not more than – anything she’s ever released. Apart from three tracks included on her 2013 compilation, Rarities, it’s her first newly recorded original material since her last studio album, It All Starts With One, which picked up the Best Female Singer/Songwriter Manifest Award (Sweden’s independent equivalent to the Grammies) and a second Norwegian Grammy (a ‘Spellemann Prisen’) for Best Female Artist, as well as a nomination for the 2012 Nordic Music Prize

‘Directions’, like the album from which it is taken, was co-produced Tobias Fröberg and BRUN, and recorded with the musicians with whom BRUN spent much of 2013 touring the world: bassist Dan Berglund (previously part of the Esbjörn Svensson Trio), pianist Martin Hederos (Soundtrack Of Our Lives), drummer Andreas Werliin (of Wildbirds & Peacedrums) and guitarist Johan Lindström, who also work together as instrumental group Tonbruket. For the single they’re joined on timpani by fellow Swede John Eriksson of Peter, Bjorn & John.

‘Directions’ hints at the path BRUN has taken with the new album, much of which finds her further pursuing the rhythmic qualities central to a number of songs on her previous record. It’s a particular departure for BRUN, who dispensed with writing on guitar and piano – as she’s always done in the past – and instead sketched out her ideas for the song on her phone using an app that allowed her to record and layer different tracks. “It includes rhythm samples that you can compose to,” she elaborates, “and that´s how I built the song, by laying down the bass line with my voice and then writing the melody on top of that. There were no melodic instruments involved, which is something new to me.” The demo was then completed with lyrics that she’d written some years earlier and had recently rediscovered in one of her old notebooks, though these were later rewritten.

“When I finished it,” she recalls, “I thought, This is going to be a great song. But the lyrics felt really wrong, because I didn’t feel that way any more. It was something I felt years ago. So I started writing the opposite, and all these images came. It was a nice experience to do that, because sometimes when I’ve written a lyric I look through it and I feel resistance somewhere: This is not what is true right now. So sometimes I change perspective to make it feel right. It’s very intuitive, and I think this song represents the kind of changes I’ve made in how I approach life. It’s about feeling strong, about feeling powerful. You can see that anything’s possible.”

BRUN also confides that, like the single, her new album will be “more extrovert”, and reveals that it’s found her returning to music that played a big role for her as a teenager. “I have this long Spotify playlist of stuff like DJ Shadow, DJ Krush, this amazing trip hop, jazz and electronica stuff. I listened to that, and wondered, What is it I like about this?” she continues. “Also, some Charles Mingus and Duke Ellington, that kind of stuff: the raw sound of those albums, which inspired those 90s albums. I wanted my voice to float on top of beats this time.” 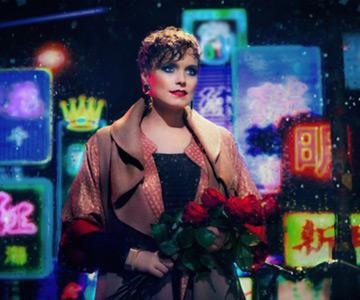