Sharon Shannon, the button accordion player from Co Clare, has recorded
and toured with a who's who of the Irish and Global Music Industry, including
Bono, Adam Clayton, Sinead O’Connor, Jackson Browne, John Prine ,Steve
Earle, The RTE Concert Orchestra, The Chieftains, The Waterboys, Willie Nelson,
Nigel Kennedy, Alison Krauss and Shane MacGowan .

However, her career took an massive upward trajectory when in the late 80s
she was asked to joined the seminal rock band The Waterboys. Her first show
with that band, to an audience of 50,000, was the on main stage at perhaps the
most well-known music festival on earth-Glastonbury.

Sharon Shannon has entertained US Presidents Clinton at the White House and Obama in
Dublin and Irish Presidents Robinson and MacAleese on presidential visits to
Poland and Australia respectively. She recently accompanied Irish president
Michael D. Higgins on his official tour of China. 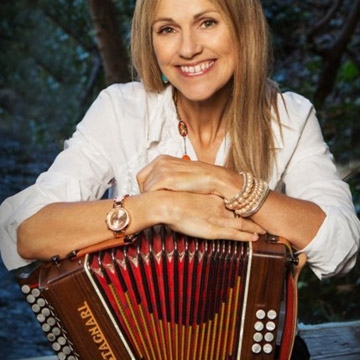