Imelda May - Live at the Marquee, Cork

Imelda May will return to play Live at the Marquee Cork this summer on 2nd July. Speaking at the time of the announcement, Imelda said, ‘I’m thrilled to announce me and the lads are returning to the Marquee Cork in July 2016, it’s one of my favorite venues and favorite crowds!’

Imelda May announced Stephanie Rainey as support for her Marquee date.

The rise and rise of Imelda May has been unstoppable since the release of her first studio album ‘LOVE TATTOO’ in the UK & Ireland in 2009, the Number 1 Mayhem followed in 2012 and TRIBAL in 2014! Imelda and the band have been touring non stop around the world since 2008 performing hits from all three album’s including ‘Johnny Got A Boom Boom’, ‘Inside Out’ and ‘Mayhem’

“A whipcracker of a voice … Songs describing rumpuses, stalkers and sexual predators are delivered with oodles of energy….dangerously rocking” – THE GUARDIAN

In between festivals and head line shows - Imelda also recorded the 2nd Season of the IMELDA MAY SHOW on RTE over the Summer, the 5 episode series took over the popular slot of the Late Late Show every Friday night, guests over the 2 seasons have included – Sinead O’Connor, Bob Geldof, Hozier, Jools Holland, Wanda Jackson, The Script and many more! However the touring life has slowed down for Imelda and the band over the last few months as she spends every waking moment writing, recording and more writing for the next album! So Imelda is itching to get back to her performing roots and hit the pavement in 2016!

Born in The Liberties, Dublin, Imelda is the youngest of five siblings and was the most susceptible to the various influences from her older brothers and sisters, which she could hear constantly through the walls of their two bedroom house. There was folk, the obligatory chart pop, and then there was Elvis. “My brother was a mad Elvis fan, and I found a tape in his room with Elvis, Eddie Cochran and Gene Vincent. I thought the music was fantastic.” By the age of nine Imelda had fallen in love with rockabilly and the blues – singing along at home and recording herself with a plastic Fisher Price tape recorder! “I started singing in a church with my sister Maria when I was four and I’ve been singing pretty much ever since. There was no stage school or musical colleges – just variety club competitions – but I was determined as I love singing so much.”

Tickets for Imelda May Live at the Marquee Cork available from: 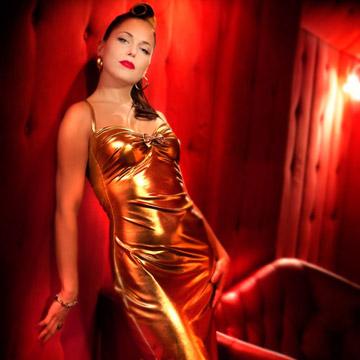