Róisín Dubh opened its doors in 1993, and has been universally regarded as the West of Ireland’s finest music venue ever since. In its original incarnation, under John Mannion & Mark Reilly, the Róisín played host to almost every musician worth hosting

In 2004, the Róisín changed hands. The new owners, Kevin Healy, Simon Heaslip, Greg Healy & Gugai, were firmly committed to building on, and improving, the Róisín’s already established reputation as the venue of choice for national and international acts. In 2006, there were extensive renovations to the building – the venue size was increased, a new bar was added upstairs and the incredibly popular beer garden was added on the roof.

Nine years after the change in ownership, Róisín Dubh 2.0, voted best venue in Connacht five years in a row by bands and songwriters in the IMRO awards, is still essentially the same as it ever was. Great atmosphere, wonderful staff and the very best place to see music and comedy, old and new.

Comedy at Róisín Dubh
Róisín Dubh has long been the home of comedy in Galway. Many great acts including Stewart Lee, Phill Jupitus & Rich Hall, list it as being one of their top 10 venues in the world. 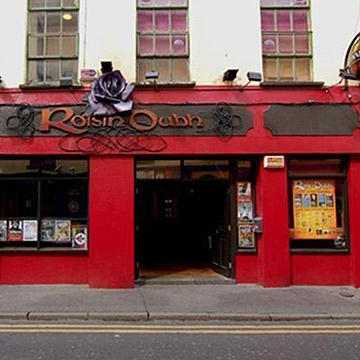 Address:Lock House, 12 Dominick Street Upper, Galway, H91 YNH6, Ireland
Featured Venue
To the best of our knowledge, our listings are correct at time of publishing however, we cannot guarantee this and in some cases they may be incomplete or incorrect. If you are ever in doubt you should always contact the venue or promoter directly. If you know of an issue with any listing, please let us know by emailing This email address is being protected from spambots. You need JavaScript enabled to view it. and we will do our best to correct the issue.