The Gaiety Theatre specialises in operatic and musical productions, with occasional dramatic shows.

For over 140 years The Gaiety Theatre has given the people of Dublin opera, musicals, drama, revues, comedy, concerts, dance, festivals and pantomime. Amid the laughter and tears, through times of war and times of affluence.

The Grand Old Lady of South King Street has remained a vital and ever changing expression of Irish culture and Irish society. Long home to the familiar faces of Maureen Potter, Niall Toibin, John B. Keane, Anna Manahan, Des Keogh and Rosaleen Linehan, whose bronze handprints, are set into the pavement in front the theatre, together with those of Luciano Pavarotti and Brian Friel, are testament to the longstanding association these great artists have had with Dublin’s Gaiety Theatre.

The Gaiety Theatre has also earned its pride by bringing international stars such a Julie Andrews, Spike Milligan, Joan Rivers and Peter Ustinov to Dublin while continuing to champion the talents of Irish icons such as The Dubliners and The Chieftains. 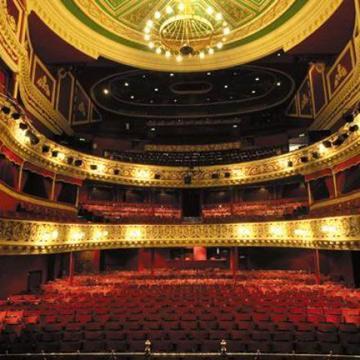 Address:50 King St S, Dublin 2, D02 V097, Ireland
To the best of our knowledge, our listings are correct at time of publishing however, we cannot guarantee this and in some cases they may be incomplete or incorrect. If you are ever in doubt you should always contact the venue or promoter directly. If you know of an issue with any listing, please let us know by emailing This email address is being protected from spambots. You need JavaScript enabled to view it. and we will do our best to correct the issue.