Mike The Pies is a lively and popular bar & events venue in Listowel, Co. Kerry.  Every week the bar hosts famous acts in music and comedy from around Ireland. Only recently, the bars popularity gained even further traction from Irish television appearances including The Today Show and The Ray Darcy Show. These appearances originated from the the participation in an online trend called the Mannequin Challenge.

Pop in for a pint to Mike the Pies, Kerry’s liveliest and most popular bar and events venue!!

Mike the Pies Bar serving the people since 1907. 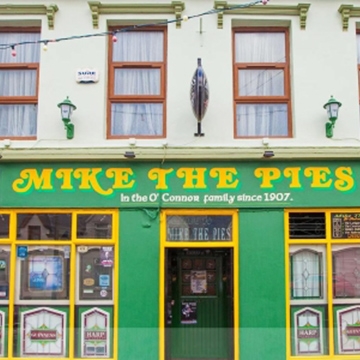 Address:28 William Street Upper, Listowel, Co. Kerry, V31 A992, Ireland
To the best of our knowledge, our listings are correct at time of publishing however, we cannot guarantee this and in some cases they may be incomplete or incorrect. If you are ever in doubt you should always contact the venue or promoter directly. If you know of an issue with any listing, please let us know by emailing This email address is being protected from spambots. You need JavaScript enabled to view it. and we will do our best to correct the issue.