Siamsa Tíre is one of the busiest theatres and arts centres in the country.  As home to the National Folk Theatre, They present five months of folk theatre productions from our repertoire between May and September.  They also train young people in the traditional arts, produce new work and tour internationally throughout the rest of the year.

From October to April, Siamsa Tíre hosts a wide range of events, including touring drama, classical music, comedy, dance and opera along with productions by local groups and musical societies.

At the heart of the National Folk Theatre lies a professional core group of full-time performers, led by Artistic Director, Jonathan Kelliher and supported by selected artists drawn from the local community but trained in the unique Siamsa Tíre style and idiom.

The aim of the National Folk Theatre is to protect, explore and develop traditional artforms in music, song and dance. These aims are delivered through numerous activities: Folk Theatre stage productions from the Siamsa Tíre repertoire, the development of new work, as well as training and education.

The origins of Siamsa Tíre and the National Folk Theatre of Ireland go back to the first ‘Summer Season’ of performances in 1968 directed by founder Pat Ahern.  In 1974, Teach Siamsa in Finuge was built and officially opened, the first General Manager, Martin Whelan was appointed, the first Board of Directors was formed, and the training of young people in the unique Siamsa style, began. 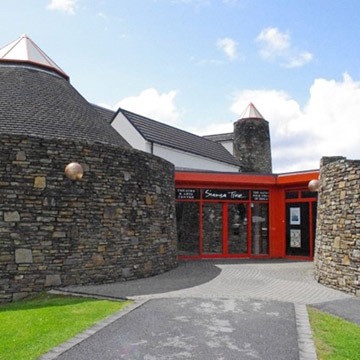 Address:Castle Demesne House, Ivy Terrace, Tralee, Co. Kerry, Ireland
To the best of our knowledge, our listings are correct at time of publishing however, we cannot guarantee this and in some cases they may be incomplete or incorrect. If you are ever in doubt you should always contact the venue or promoter directly. If you know of an issue with any listing, please let us know by emailing This email address is being protected from spambots. You need JavaScript enabled to view it. and we will do our best to correct the issue.