The Garage Theatre takes its name from a reference in Pat McCabe’s book, “The Butcher Boy” – Francie’s mother has a breakdown and he says she has gone into the Garage to get it fixed! (The theatre was previously  located in a disused ward in St Davnet’s Psychiatric Hospital, Armagh Road, Co Monaghan).

Opened in 1992 following an initiative by the VEC, it was originally funded by the VEC, Monaghan Dramatic Society and the Arts Council/An Chomhairle Ealaion. This funding was to provide a professional theatre space.

In 2013 The Garage Theatre was relocated within the Monaghan Education Campus, which is a state of the art facility located on the Armagh Road on the outskirts of Monaghan town. The theatre is under the remit of Cavan Monaghan Education and Training Board (CMETB). 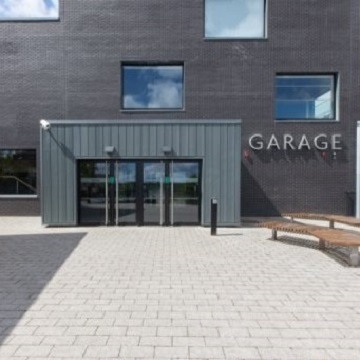 Address:M-Tek 2 Building, 4 Armagh Rd, Knockaconny, Co. Monaghan, Ireland
To the best of our knowledge, our listings are correct at time of publishing however, we cannot guarantee this and in some cases they may be incomplete or incorrect. If you are ever in doubt you should always contact the venue or promoter directly. If you know of an issue with any listing, please let us know by emailing This email address is being protected from spambots. You need JavaScript enabled to view it. and we will do our best to correct the issue.