is headquarters of the Gaelic Athletic Association (GAA), is the 3rd largest stadium in Europe.

Concerts in Croke Park
Not only has Croke Park witnessed epic sporting battles on the pitch, we’ve also played host to a who’s who of international rock and pop acts - performing sell-out shows to hundreds of thousands of music lovers, travelling from all over the world during the summer months.

Musical icons such as Tina Turner; Bon Jovi; The Police; Neil Diamond and Westlife have all entertained the crowds beneath the Dublin skyline and more recently – Take That, One Direction, The Script, Pharrell and Ed Sheeran have wowed a capacity arena with their performances.

Gatekeepers of Irish rock music, U2 have played the venue for sell-out, three-night runs on a number of occasions as part of their world tours - with their iconic 360° tour set, rising majestically up above the crowd from the hallowed turf, providing a particularly striking backdrop to their 2009 performance.

Croke Park is a GAA stadium located in Dublin, Ireland. Named in honour of Archbishop Thomas Croke, it is often called Croker by some GAA fans and locals. It serves both as the principal stadium and headquarters of the Gaelic Athletic Association. 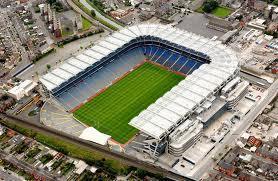 Address:Croke Park, Jones Road, Dublin 3
To the best of our knowledge, our listings are correct at time of publishing however, we cannot guarantee this and in some cases they may be incomplete or incorrect. If you are ever in doubt you should always contact the venue or promoter directly. If you know of an issue with any listing, please let us know by emailing This email address is being protected from spambots. You need JavaScript enabled to view it. and we will do our best to correct the issue.